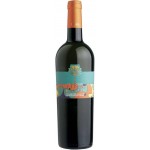 €9.00
The Mamarì from the renowned Sicilian wine producer Cantine Fina is a straw yellow wine made solely from Sauvignon Blanc grapes grown in vineyards at an altitude of 550-600 m. in western Sicily. It is a young and fresh wine made from young vines. It has a bouquet where herbaceous and vegetable aromas of green pepper stand out. The taste is Intense fruity with notes of exotic fruits such as pineapple and banana. A lovely everyday wine.
024-010
White Wine Siciliani

Cantine Fina is a small winery owned by the Fina Family located between Marsala and Trapani in west Sicily. Their wines express the uniqueness of this Sicilian area. The winery follows a tradition of winemaking that started thousands of years ago when the Greek and Phoenician settlements on the Sicilian west coast started the cultivation of grapes.

Sauvignon Blanc is a relatively new grape to Sicily, but the excellent wines produced have led to this vine spreading considerably on the island since the mid-nineties. The fresh version, vinified in steel tanks, is the one by far prevalent among Sicilian producers including the Fina winery.