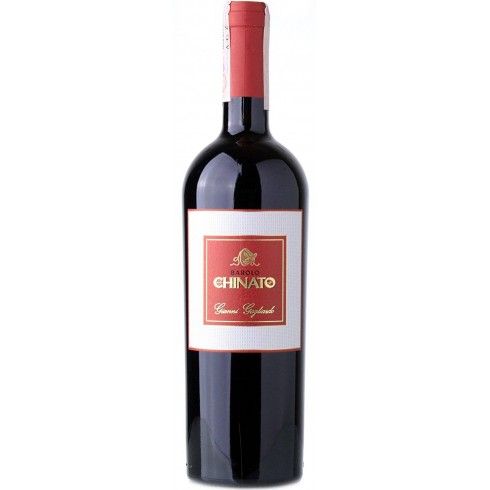 Barolo Chinato from the well-known Barolo producer Gianni Gagliardo. A unique aromatised sweet red wine made from Barolo wine infused with aromas according to the producers secret recipie. In order to reach a harmonic taste, sugar and alcohol are added to the wine.

The Nebbiolovines for the Barolo Chinato red liqueur wine grow in Gianni Gagliardo vineyards located in the hilly terrain in the Barolo region in Piemonte.

The Barolo Chinato liqueur wine is a type of amaro developed at the end of the 1800s when two local spice sellers, experienced in using spices, developed the «delicious Barolo-chinato». Since then the production has been recognized and standardized in the regulations for wine from Barolo.

The production of the aromatised Barolo based wine must begin with a Barolo wine having completed its minimum period of ageing. As far as its features are concerned, it must also conform to all chemical, physical and sensory tests fixed in the Barolo production code.
The aromatisation process of Barolo is carried out through a cold infusion in a hydro-alcoholic solution of cinchona bark, gentian root, cardamom seeds and other less important spices, such as vanilla pods.

After its preparation, Barolo Chinato is matured for at least one year in oak casks before being bottled and released on the market; in order to let all the aromatic elements in the infusion blend in a perfectly harmonious sensation. The wine then continues its maturation in the bottle over time, developing a flavour of greater softness and becoming better and better.

Longevity is like a Barolo, it develops greater harmony and softness over time. 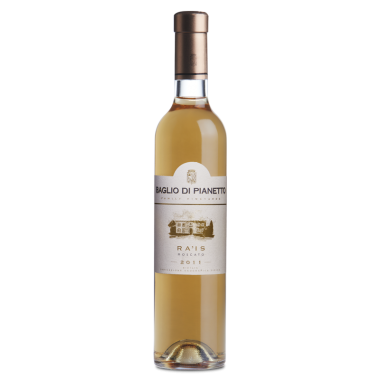 Ra'is is a very concentrated sweet Moscato wine from Baglio di Pianetto, produced with grapes grown in the Val di Noto in Sicily. It is craftsmanship at its best with all processes done manually. A wine that expresses the colors and scents of Sicily. 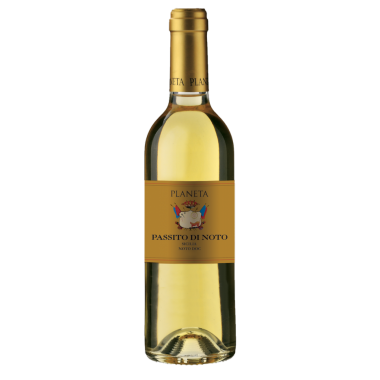 The Passito di Planeta is an expression of Planeta's commitment to produce modern wines that reflect the unique character of Sicilian territory. An ancient wine that becomes current with modern methods for drying and processing well ripened grapes. 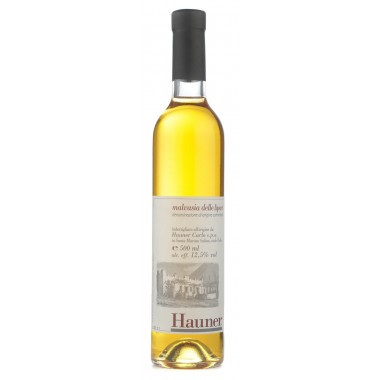 Unique and elegant sweet wine, the Malvasia delle Lipari Passito Selection from Carlo Hauner is the result of careful sorting of the best grapes. A wine to keep aside for the most special occasions. It will certainly be worth the effort! 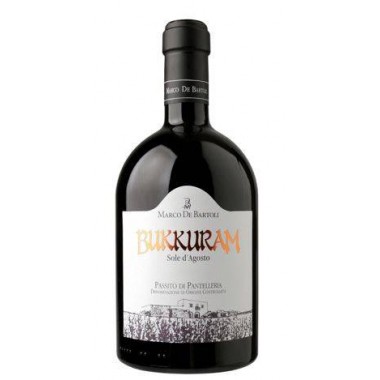 Bukkuram Sole d' Agosto from famous Sicilian producer Marco De Bartoli. A moscato passito sweet wine from the volcanic island of Pantelleria, which has awaken from a long hibernation the interest for a dessert wine that even Greek mythology counts among its legends. 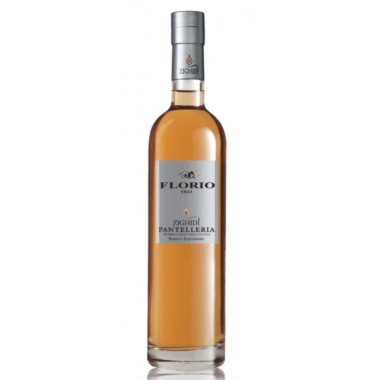 Zighidì Passito di Pantelleria Liquoroso from the famous Sicilian wine producer Florio in Marsala. It is a fortified passito wine produced on the island of Pantelleria from grapes dried for days under the scorching sun. The essences of the aromas are concentrated within this wine. It has an ample bouquet and a full, soft and intensely aromatic flavour of... 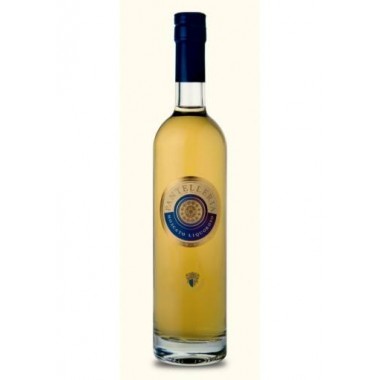 Moscato Liquoroso Pantelleria DOP from the Duca Castelmonte line of the famous Pellegrino House in Marsala, Sicily. One of the most appreciated Italian sweet wines made from Zibibbo grapes grown on the small and very hot island of Pantelleria to the south of Sicily. 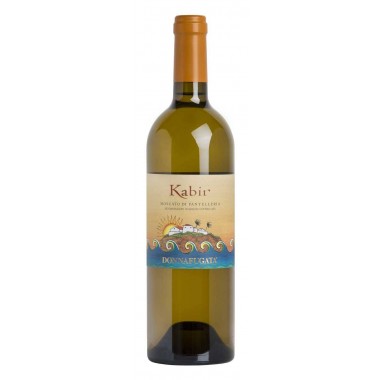 Kabir Moscato di Pantelleria from the world famous Sicilian producer Donnafugata. This wine is the little sister of the famous Ben Rye sweet wine. Kabir is a very pleasant naturally sweet wine produced on the very hot island of Pantelleria. It is characterized by a rich and fragrant bouquet of classic flowery and fruity scents combined with fresh notes of...

BiancoMandorla from Martinez in Marsala in western Sicily, a golden yellow Sicilian liqueur wine specialty to be enjoyed with fruit and biscuits or on its own. Produced from Inzolia grapes coming from the Marsalla area and Sicilian almond flavor. 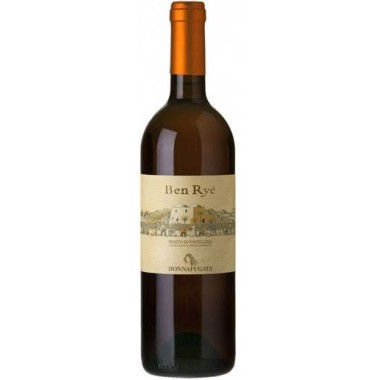 Ben Ryè Passito di Pantelleria from the world famous Sicilian producer Donnafugata. A brilliant amber coloured wine with a unique personality. One of the most appreciated Italian sweet wines in the world produced on the small and very hot island of Pantelleria south of Sicily. An international icon of Italian excellence in the field of wine making

Malvasia Vino Liquoroso from the recognized producer Martinez located in the famous wine city Marsala on the west coast of Sicily is a light and fine golden yellow liqueur wine for desserts that represents all the sweet tastes of Sicily. Lovely and lively.

Zibbibo Vino Liquoroso from the recognized producer Martinez located in the famous wine city Marsala on the west coast of Sicily is a light and fine golden yellow liqueur wine for desserts that represents all the sweet tastes of Sicily. A lovely and lively everyday dessert wine with a fine taste of muscat. 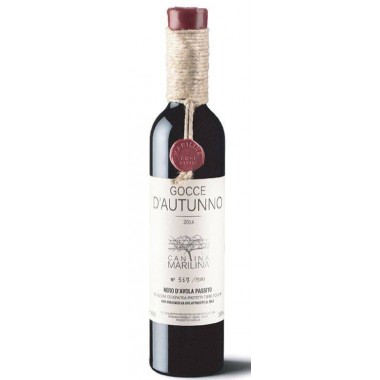 Gocce d'Autunno from the young and ambitious organic wine producer Cantina Marilina is a unique ruby red sweet wine made from Nero d’Avola grapes. Gocce d'Autunno means drops of autumn, and reflects to the vinification process where the grapes are dried for 10-15 days after the harvest in September to concentrate the sugar and flavours for this harmonious... 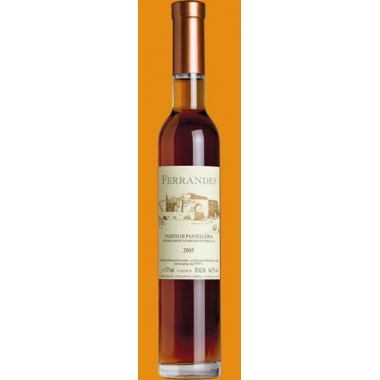 Passito di Pantelleria from the small family-run winery of Salvatore Ferrandes on the island of Pantelleria located between Sicily and Tunisia. A mature intense golden yellow sweet wine produced from the zibibbo grapes – also known as Muscat of Alexandria. A beautiful fresh wine with an intense bouquet of raisins and dried and candied fruit. A real... 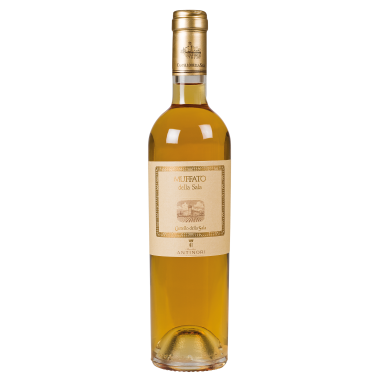 Muffato della Sala from Castello della Sala part of the famous Antinori House - a fascinating golden yellow Sauterne type sweet wine made from a blend of Sauvignon Blanc, Grechetto, Traminer, Sémillon and Riesling grapes attacked by Botrytis Cinerea or noble rot. A delicate and elegant wine with its floral scents dominated by ripe fruit, with sweetness... 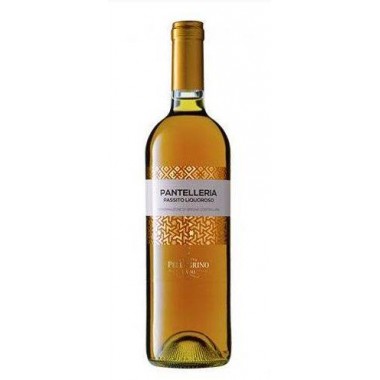 Pantelleria Passito Liquoroso from the famous Pellegrino Cellar in Marsala is produced from Zibibbo grapes grown in volcanic sandy soil at an altitude of up to 300 m near the sea on the island of Pantelleria west of Sicily. This golden fortified liqueur wine has an intense and lingering bouquet. It is well-balanced and honeyed, with notes of dried figs... 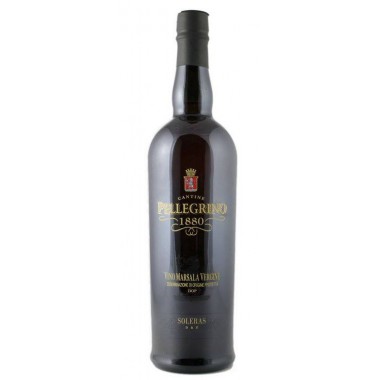 Marsala Soleras Vergine from famous Pellegrino Cellar in Marsala is produced from Grillo, Catarratto and Inzolia grapes grown in clayey soil near Marsala in western Sicily. It is produced over 5 years using the traditional Soleras method. This beautiful golden fortified Marsala wine has an intense bouquet with strong spicy notes. It is fresh and dry with... 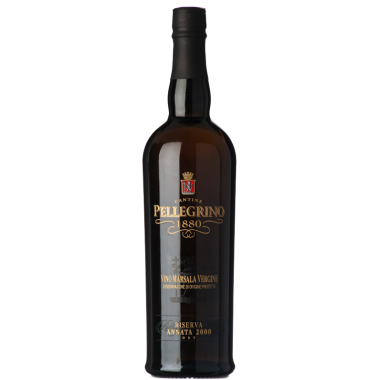 Vino Marsala Vergine Riserva from the famous Pellegrino Cellar in Marsala is produced from Grillo, Catarratto and Inzolia grapes grown in clayey soil at an altitude of up to 200 m near Marsala in western Sicily. This beautiful deep golden fortified Marsala wine is intense and lingering with spicy notes and hints of dried fruit. It is dry with hints of... 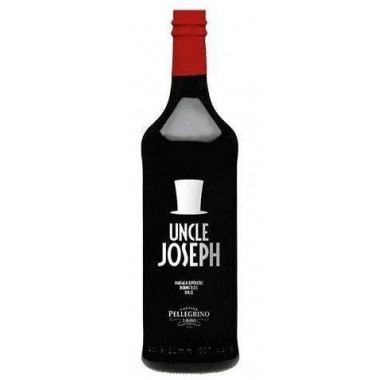 Uncle Joseph from the famous Pellegrino Cellar in Marsala is produced from Nero d’Avola grapes grown in clayey soil near Marsala in western Sicily. This beautiful fortified ruby red Marsala wine is extremely fruity, with notes of black cherries, pomegranates and plums. It is sweet, with evident hints of red berries, black cherries, Marasca cherries and... 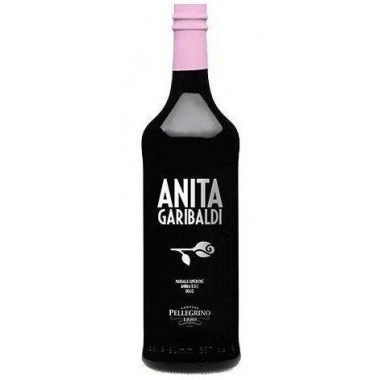 Anita Garibaldi from the famous Pellegrino Cellar in Marsala is produced from Grillo, Catarratto and Inzolia grapes grown in clayey soil near Marsala in western Sicily. This fortified amber Marsala wine has an intense and persistent bouquet with strong notes of quince and pleasant hints of dry fig and vanilla. It is sweet and persistent, with strong hints... 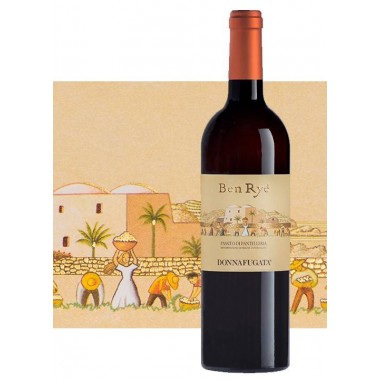 Ben Ryè Passito di Pantelleria from the world famous Sicilian producer Donnafugata. A brilliant amber coloured wine with a unique personality. One of the most appreciated Italian sweet wines in the world produced on the small and very hot island of Pantelleria south of Sicily. An international icon of Italian excellence in the field of wine making 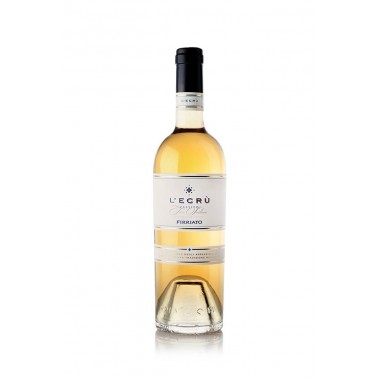 L’Ecrù is a natural passito wine produced from Zibibbo grapes by the famous Sicilian top producer Firriato. This is an elegant sweet wine made partly from dried grapes – a great dessert wine. It is an intense golden wine with fine scents of orange blossom and honey, candied orange peels giving an expression of the warm Sicilian sun enriched by subtle yet... 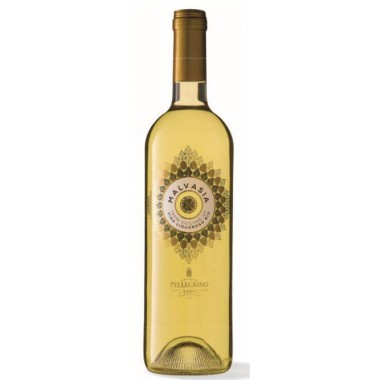 Malvasia Vino Liquoroso Bio from the famous Pellegrino Cellar in Marsala is produced from Malvasia Bianca grapes grown in sandy-clayey soil at an altitude of up to 300 m near the sea in western Sicily. This straw yellow fortifiedliqueur wine has intense notes of ripe fruit and hints of melon and apricots. It is full-body and well-balanced, with hints of... 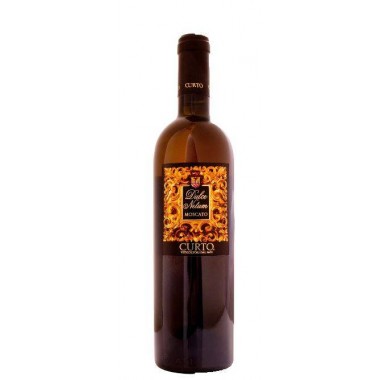 Dulce Netum Moscato Passito from the old Sicilian Curto winery located near Siracusa in the South-west of the island. The 20 years old Moscato vines grow in mineral rich calcareous soil near the sea. This is a golden dessert wine rich in fragrances of ripe fruit, pear, dried figs and honey. The taste is full-bodied with a rich and complex structure and a... 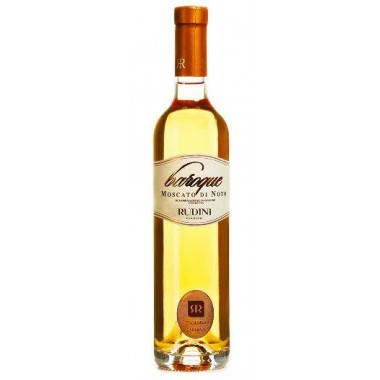 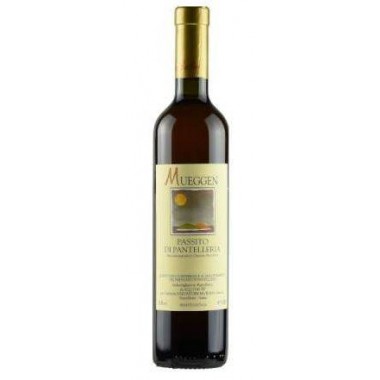 Mueggen Passito di Pantelleria from the wine producer Salvatore Murana is made from dried moscato grapes grown on bush vines on the island of Pantelleria to the west of Sicily. It is an amber orange sweet wine with intense aromas of oranges, lemons, orange blossom and cooked apples that develop into notes of aromatic herbs. On the palate it is sweet with... 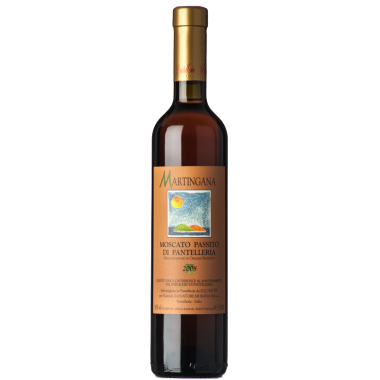 Martingana Passito di Pantelleria - a top wine from the Salvatore Murana made from dried moscato grapes grown on old bush vines on the island of Pantelleria to the west of Sicily. It has a topaz colour and an intoxicating bouquet with orange blossom honey, dates, dried figs, apricot jam, sweet spices such as cinnamon and nutmeg. It is sweet, enveloping,... 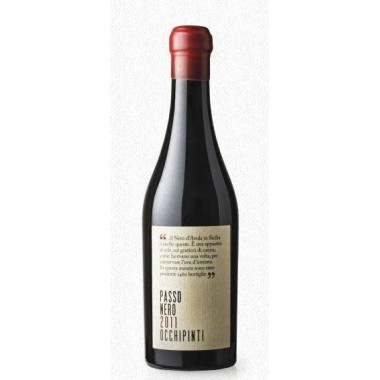 Passo Nero Passito - a fine organic wine from famous Sicilian producer Arianna Occhipinti made from dried Nero d’Avola grapes grown in sandy and chalky soil near Vittoria in Sicily. It is a concentrated dark ruby red wine with hints of red fruit jam and notes of licorice and chocolate in the bouquet. It is sweet with a finely balanced acidity that keeps... 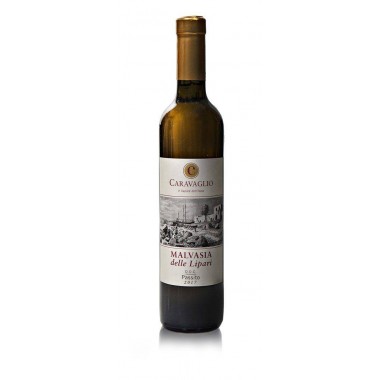