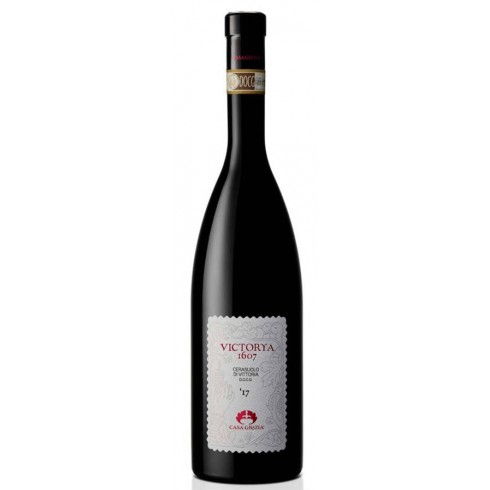 Victorya 1607 a beautiful red wine from the young Sicilian winery Casa di Grazia. A classical Cerasuolo di Vittoria to the memory of countess Vittoria Colonna. The vines grow in sandy soil near the Biviere Lake outside Gela in Southern Sicily. This is an elegant wine with beautiful scents of wild fruits, mulberry and pomegranate. The taste reflects black pepper mixed with carob and sweet cherries

Casa Grazia was born from a dream that embodies a destiny.

It all starts in the early twentieth century, when the Brunetti family begins the cultivation of their lands, and among olive groves and orchards, starts the production of must grapes and table grapes. In the eighties, when work commitments lead Angelo Brunetti to take care of other things, it is Maria Grazia Di Francesco, his life and travel companion, who collects his dream, taking care of those vineyards, thus discovering herself a woman of wine, fascinated by the vineyard.

In the setting of the protected Natural Reserve of the Biviere Lake near Gela, tied to ancient myths and woven with popular folk tales, Casa Grazia bottles the fruit of a unique terroir where dunes, wind and sea let good grapes mature. A special territory, thanks to the presence of the biggest coastal lake in Sicily – further characterized by being a salty lake – that falls perfectly in the D.O.C.G. of the Cerasuolo of Vittoria.

The name of the wine refers to Vittoria Colonna, who was the daughter of Marcantonio II Colonna, viceroy of Sicily from 1577 to 1584. After his death Vittoria assumed the regency of the county of Modica in the name and on behalf of her minor son Juan Alfonso Enriquez de Cabrera. Vittoria Colonna asked the Spanish monarch to grant a royal privilege for the foundation of a new settlement in Sicily. The request was accepted on 31 December 1606 in Madrid. The new city was built with the name of Vittoria (today in the province of Ragusa) in honor of its founder, on 24 April 1607, who had several families transferred there to increase the agricultural exploitation of the western part of the Modica county.