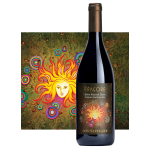 €53.00
Fragore from the famous Sicilian family winery Donnafugata. A wine from the Collection Icon Wines - wines with a unique personality, icons of excellence. This is a single vineyard wine grown in the Contrada Montelaguardia. A pale ruby red wine with profound bouquet featuring spices and wild berries. It reveals extraordinary complexity and elegance characterized by minerality and fine tannins.
044-270
Red Wine Siciliani

Donnafugata’s wine production philosophy is to offer the world wines distinguished by pleasantness and complexity, wines that are capable of captivating and making happy those who taste them. They want to represent the excellence of Made in Italy, wines that represent an innovative and forward thinking Sicily and produced with respect for the environment.

The Nerello Mascalese vines for the Fragore red wine grow in Donnafugata’s vineyard at Contrada Montelaguardia at an altitude of 750 m. on the northern slope of Etna outside of Randazzo in Eastern Sicily. The composition of the sandy texture lavic soil is characterized by a good organic endowment. Deep and rich in minerals the lavic soil allows strong root growth.

The grapes were harvested manually into crates with careful selection of the grapes in the vineyard. Once the clusters reach the winery they undergo further selection followed by destemming and soft pressing. Fermentation took place in stainless steel tanks with maceration on the skins for 10-12 days at a temperature of 25 °C. The wine aged in French oak (second and third passage barriques) for 14 months and then at least 10 months in the bottles before release.